About the Differentiae Database

In the medieval liturgy, the cycle of 150 psalms were sung each week, accompanied by antiphons that situated each psalm within the daily liturgy. The psalms were intoned to formulaic melodies (psalm tones) and the antiphons were sung before and after each psalm.

The differentia, or "saeculorum amen" formulas, were part of the doxology that was appended to the end of each psalm intonation to "Christianize" the psalm:

Glory [be] to the Father, and to the Son, and to the Holy Ghost.
As it was in the beginning, and now, and always, and into the ages of ages. Amen.

While there was one psalm tone for each of the eight modes (plus the tonus peregrinus), there were multiple possible differentiae within each mode.

In antiphoners, the main focus of this database, differentiae are frequently written in the margins of the manuscript or after the end of each antiphon. They are identifiable by their formulaic six-syllable patterns and the text that accompanies them: EUOUAE (the vowels of "saeculorum amen", or some variation thereof); the textual incipit for the psalm; or, particularly when differentiae  are written in the margins of the manuscript, tonary letters (ac, ad, wb, yh, etc.) or Roman numerals indicating the mode of each differentia. 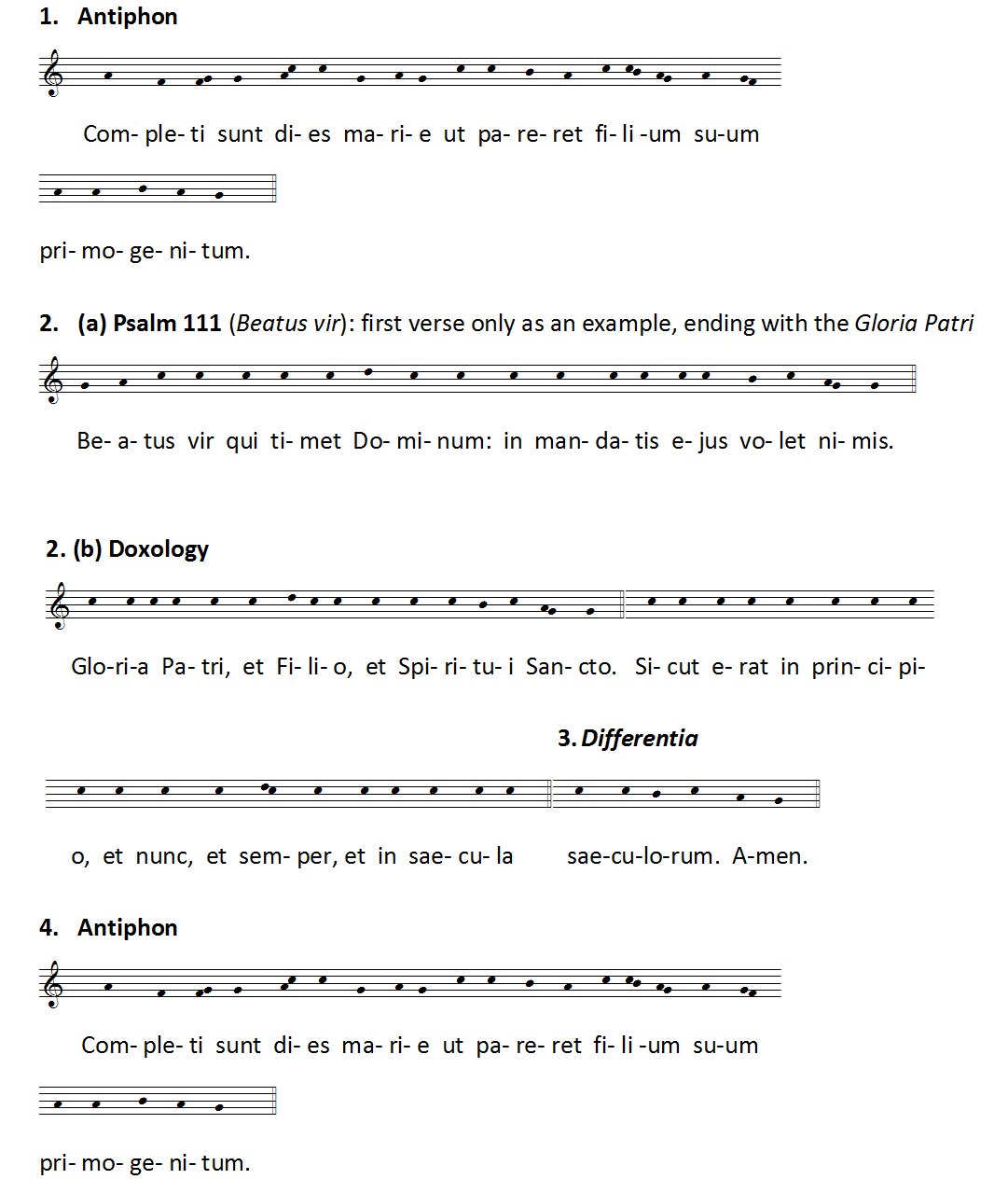 About the Differentia Standardization Project:

Indices for medieval chant manuscripts, including those found in the Cantus Manuscript Database, previously indexed differentia so that the codes applied to each unique formula are only accurate to a single manuscript or small group of manuscripts. 1.A1 (a mode 1 differentia that ends on A) in one manuscript is not necessarily the same as 1.A1 in another manuscript. This makes manual cross-manuscript comparison rather difficult and computational cross-manuscript comparison relatively impossible. This source-specific system was initially adopted in the Cantus Manuscript Database largely due to the technological restrictions of mainframe computers and hole-punch cards, which limited the number of characters for indexing each chant.

Starting in the fall of 2016, Shaw undertook a project, as a Research Assistant with the SSHRC-funded Cantus Ultimus and Single Interface for Music Score Searching and Analysis (SIMSSA) projects, to develop a standardization system for differentia and apply it to the manuscripts in the Cantus Manuscript Database. The data amassed during this project is now available in this database and the standardized identification system should be used in future when indexing manuscripts, if possible.

For more details on the project, see the following:

*As part of this thesis, several visualizations and interactive tables, graphs, and maps were created with data from the Differentiae Database and the Cantus Manuscript Database. To view/use these supplementary components, see Analyses.

The Differentia ID is a unique alphanumeric code assigned to each differentia, regardless of the manuscript. It is made up of a minimum of two parts, and an optional two other parts:

There are two optional characters that extend the Differentia ID and are used for transposed differentia:

See Tutorials for definitions of all the fields used in the database.

Images for the unique differentia in each manuscript are included in the database when possible, according with the manuscript's digitization status and each library and archives' rules concerning the use of their images (i.e., their Creative Commons license). As more manuscripts are digitized and permissions are acquired, more images will be made public. All differentiae for each manuscript were indexed in consultation with digital or microfilm images.

Debra Lacoste, the current project manager for the Cantus Database, identified the standardization of the Cantus differentia field as a priority, and in the Fall of 2016, she and Jennifer Bain, a co-investigator with Cantus, hired Rebecca Shaw as a Research Assistant with the the SSHRC-funded Cantus Ultimus and Single Interface for Music Score Searching and Analysis (SIMSSA) projects to complete the differentia standardization project.

The Differentiae Database, which presents the data gathered during the standardization project in an digital, interactive format, was created as part of Shaw's thesis project, completed in 2019 at Dalhousie University (Halifax, Nova Scotia, Canada). Funding for her thesis research and the construction of the database was provided by the Killam Trusts, through a Izaak Walton Killam Predoctoral Scholarship at Dalhousie University (Halifax, Nova Scotia) and by the Social Sciences and Humanities Research Council of Canada (SSHRC), through a Joseph Armand Bombardier Canada Graduate Scholarships-Master’s (CGS-M) scholarship.

This work is licensed under a Creative Commons Attribution-NonCommercial-ShareAlike 4.0 International License.